HNMUN 2017 Commitees:
General Assembly - Safeguarding the Right to Self-Determination in the 21st Century 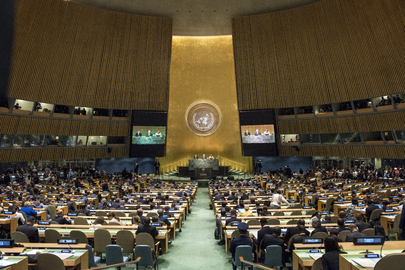 The General Assembly (UN Photo/Cia Pak)
‘The principle of all sovereignty resides essentially in the nation.
No body nor individual may exercise any authority
which does not proceed directly from the nation.'
(Declaration of the Rights of Man and the Citizen,
26 August 1789, the National Assembly of France)
"Peoples are not to be handed about
from one sovereignty to another
by an international conference or an understanding
between rivals and antagonists.
National aspirations must be respected;
peoples may now be dominated
and governed only by their own consent.
"Self-determination" is not a mere phrase."
(11 February, 1918:
President Wilson's Address to Congress,
Analyzing German and Austrian Peace Utterances)

Both citations draw similar conclusions, but use entirely different phrasing. Implementing a world, in which people themselves act as sovereign, decide about their respective governance without any superior influence, remains one of the main wishes of the United Nations Charter and refers to some of the most principal human rights. The question though, which arises when comparing both citations, is how to define this status. Is it a status of national sovereignty or of self-determination of people/peoples? Does this make a difference? It possibly did not in a world of colonialism, aristocracy, and colonialism, where the national authority belonged only to a few actors not feeling any connection to the majorities and hence both approaches did not interfere. It certainly does though in a multinational world, in which through the rising significance of international laws and historical examples a state cannot be seen as one nation, and a nation cannot be seen similar to all people living inside the territory of this nation. 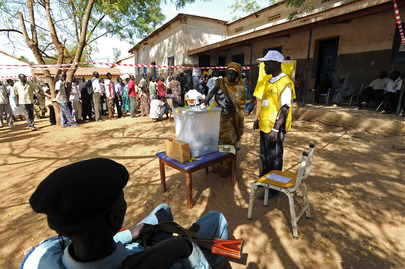 This conflict leads to various crisis, conflicts and also wars inside and between states, nations and peoples. It is a conflict of huge international importance, but also of a lack of widely-accepted principal definitions and guidelines.

To find a pathway between self-determination of people and sovereignty of states, surely is one of the major questions to be tackled by the General Assembly - the international community must answer, especially regarding recent developments and many new circumstances in a world of seemingly unstoppable globalization.

The Study Guide for the General Assembly is online.